The world
of Kosmos

Kosmos has been shining bright on Helsinki’s restaurant scene for almost a hundred years. Many other restaurants have opened and closed their doors whilst Kosmos has endured, flourished and remained in the heart of Helsinki.

The family-owned restaurant was opened on August 6th in 1924. Today, Kosmos is run by the 4th generation of the restaurant’s owner. The décor is easy going and the service is thoughtful. The classic European gastronomy has remained the same from decade to decade. In addition, the long-lasting staff has always been a part of the Kosmos family. The owner’s son has taken after his father as a cloakroom attendant and the experienced chefs and servers, with their incomparable expertise, have created unforgettable experiences for customers for over 30 years.

Regular customers have enjoyed Kosmos’ universe for decades: presidents, artists, businesspeople, students and, last but not least, travellers who seek the experience of an authentic Finnish restaurant culture. All these individuals have found their way to Kosmos and enjoyed its atmosphere and traditional cuisine.

The history of Kosmos is filled with memories of a well-lived life, unforgettable people and great food. The most important things for us has always been our customers and our original, straightforward and broad-minded business idea: to serve “impartially the wealthy and the poor, the civil elite and everyday customers”. 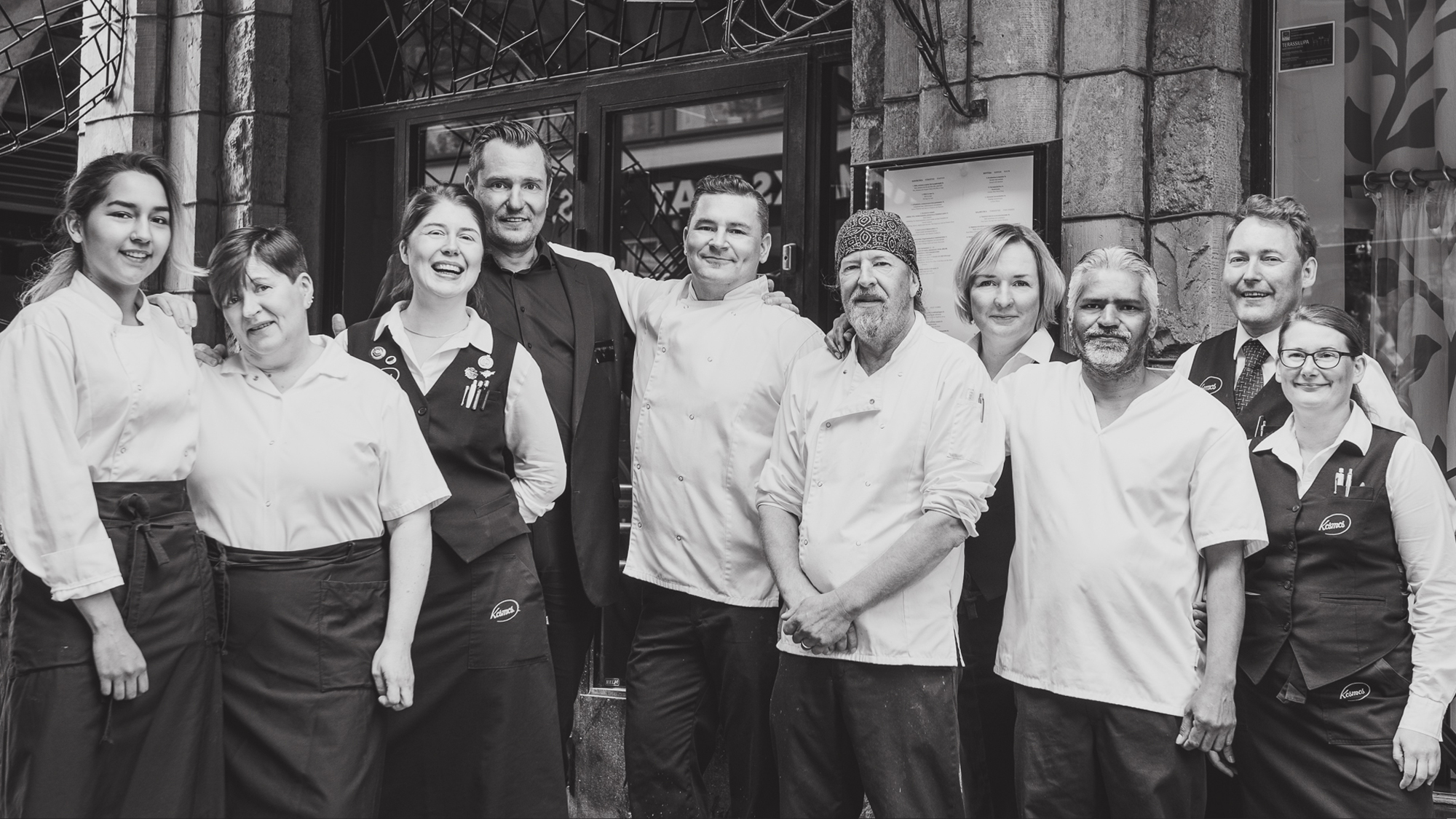 THE HISTORY OF KOSMOS

Kosmos’ first ninety years attest to the staying power of an enterprise faithful to its own style. However, despite the restaurant’s apparent agelessness, ambience, the clientele, and as well as the preferences for food and drinks, Kosmos has changed during its history.

When, in 1924, Yrjö Teodor Lindfors established the Kosmos dining rooms on what was then the Vladimirinkatu street, prohibition prevailed in Finland. The modern, up-scale yet moderately priced restaurant, found favour particularly among university students.

The easing of the Great Depression ushered in a new era in which Vladimirinkatu was replaced with the more patriotic Kalevankatu, the Swedish name Lindfors was fashionably translated into the Finnish Hepolampi, and 1932 brought the repeal of prohibition. The growing prosperity brought in new customers: lawyers, artists, civil servants, businessmen – even the occasional businesswoman.

Mrs Aino Hepolampi took charge of the enterprise. The Winter War (1939-40) first brought an end to coffee and then beer, and the frugal meals served against coupons were rationed to the gram. With the end of what is known in Finland as the Continuation War (1941-44) already in sight, business came to a halt when Kosmos was requisitioned and leased for use as a mess hall by the German army.

After the war, lunches were augmented by generous quantities of schnapps, and the punches and cognacs that rounded meals off were followed by the mixed drinks that typified the era.

In a moralistic campaign by the state, alcohol monopoly restricted liquor consumption and its availability in restaurants, and Kosmos was gravely reprimanded for disproportionate sales of strong spirits.

The enduring favourites on the menu – escalope of veal à la Oscar, pork chop Robert and fried salmon with tartar sauce – gradually came to be accompanied by international newcomers such as paella, chop suey and cannelloni.

Today our kitchen seeks to spotlight a culinary culture with the most characteristic of our capital, creating a “Helsinki cuisine”, based on long-standing Russian, French and Swedish influences combined with updated Finnish cooking traditions and indigenous ingredients. From Baltic herring to blinis with whitefish roe, from sweetbread salad to reindeer with spruce-shoot sauce – these are delicacies that appeal to international tastes as well.

In the 1950’s the clientele had come to include artists and the journalists associated with nearby newspaper offices, in the 1960’s Kosmos was invaded by writers and leftist radicals. Kosmos became a cultural hangout. The “better” writers drank cognac, while everyone else went over to wines.

It was during this period that the first art was acquired for the dining room. The works of art that our customers can enjoy are made by Juhani Harri, Alvar Gullichsen, Martti Aiha, Olli Pajulahti and Sirkku Ala-Harja.

Table linens, broadlooms, the shades of the chandeliers, and the planters have later been added but for the most part the dining room interior has retained its original appearance, as created by architecture student Arvo Aalto, furniture designer Einari Kyöstilä, and Eino Räsänen, who carved the Hellenic motifs of the booth panels. In 2001 the entrance was remodelled by Stefan Lindfors, and discreet changes to the dining room were overseen by Kaisa Blomstedt.

In these cross-currents of the past and present, of respect for preservation and renewal, what has perhaps best endured is Yrjö Hepolampi’s original, straight-forward business idea: now in our fourth generation as a family enterprise, we continue to serve with impartiality and pride both the wealthy and the poor, the civil elite and everyday customers. 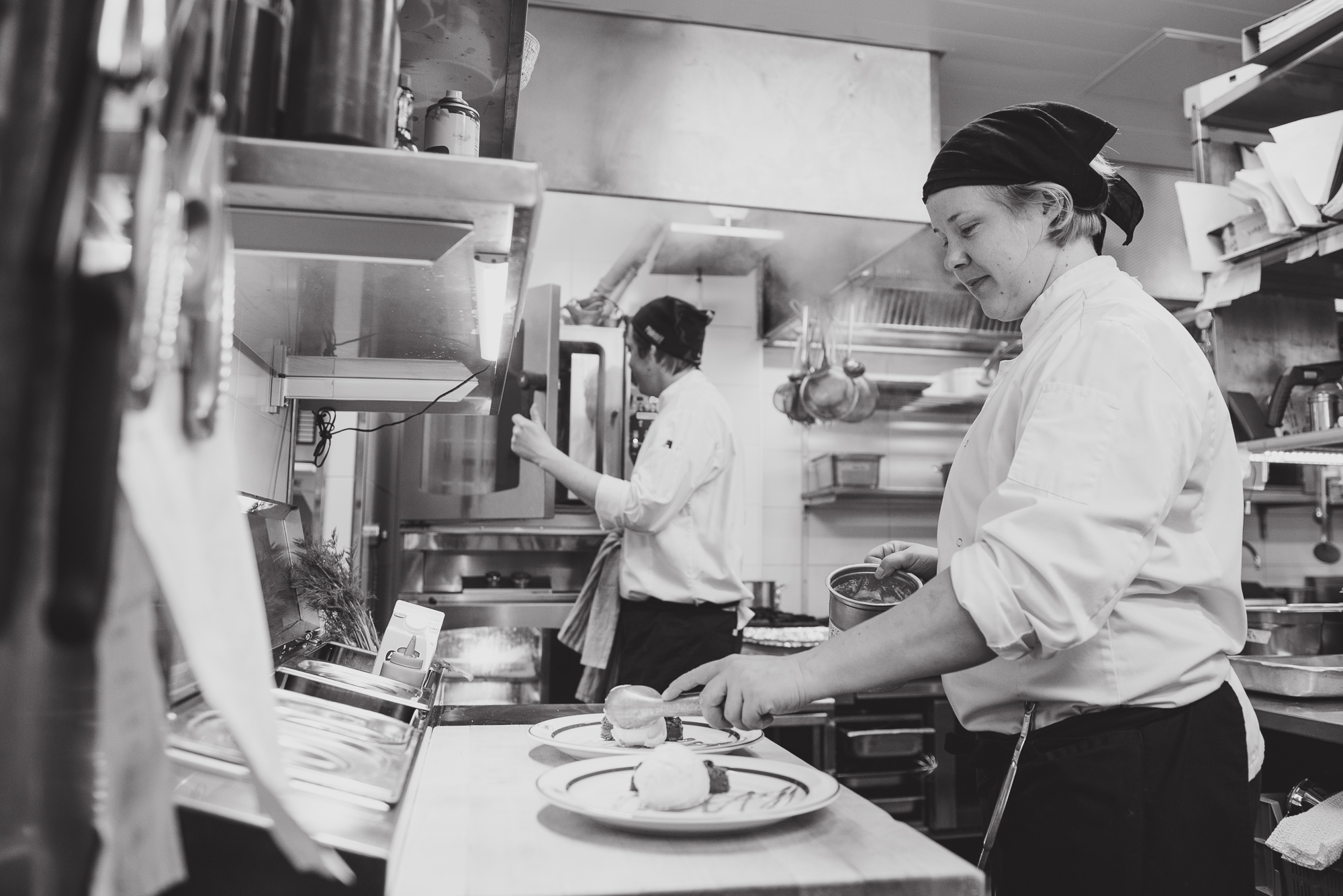 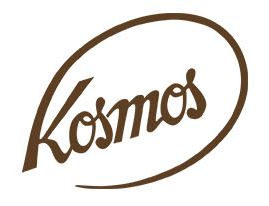